There are two unpleasant truths regarding the gruesome murder of Saudi dissident journalist Jamal Khashoggi at a Saudi consulate in Istanbul, Turkey, in 2018.

The first is that Saudi Arabian Crown Prince Mohammed bin Salman, the de facto ruler of the Middle Eastern state, was almost certainly responsible for ordering the murder, despite his protestations to the contrary.

The second is that Saudi Arabia, while a sometimes unpleasant and untrustworthy ally, is a necessary ally nonetheless. This doesn’t mean the kingdom doesn’t need to be held to account over this or any of its other numerous other transgressions. But it does mean it’s the only regional power with the clout, the capacity and the resolve to balance the designs of the Islamic Republic of Iran to become the hegemonic regional power.

However bad you may think a government that lures an opposition figure into a consulate to butcher him is — and it’s grotesque, just so we’re under no illusions here — Saudi Arabia is still far preferable to the murderous, repressive bellicose Khamenei/Rouhani regime in Tehran.

All of which made the release last week of a near-definitive U.S. intelligence report that Crown Prince bin Salman approved the operation that led to Khashoggi’s death wholly unsurprising. The same could be said for President Joe Biden’s reaction, which could be crudely described as a resigned shrug.

The media didn’t make too much of this. Instead, they knew whom to blame: 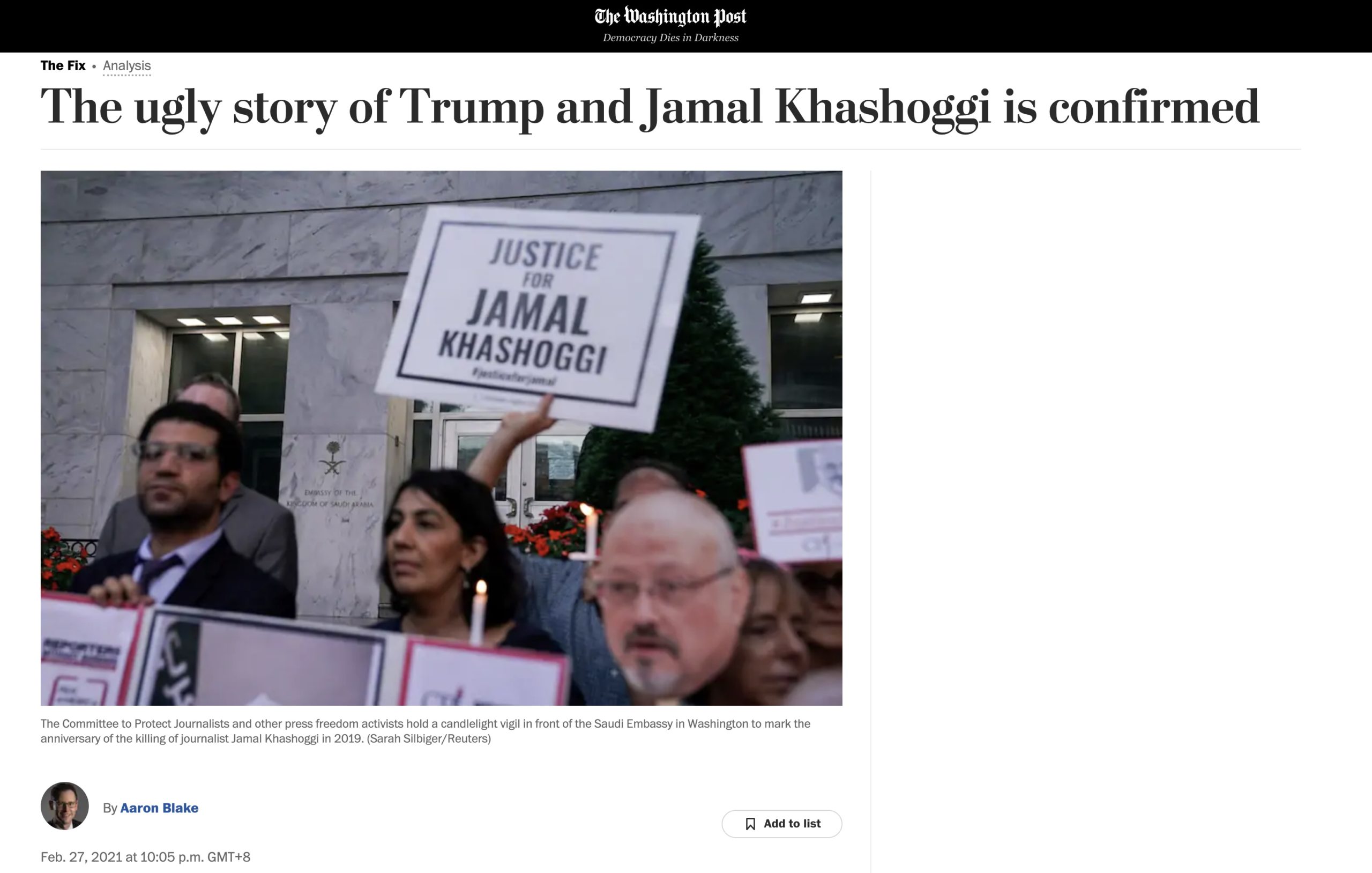 This is The Washington Post, Khashoggi’s former employer. On Saturday, Aaron Blake, The Post’s senior political reporter, excoriated the Trump administration for not releasing the report for two years. (Mind you, the Biden administration’s two-page summary wasn’t exactly exhaustive, but it wasn’t as if The Post was going to hold anyone to account for that.) The Post basically claimed Trump all but ignored what happened to Khashoggi.

“Since 2017, the Crown Prince has had absolute control of the Kingdom’s security and intelligence organizations, making it highly unlikely that Saudi officials would have carried out an operation of this nature without the Crown Prince’s authorization.”

The ugliness, as far as Blake was concerned, stemmed from Trump’s statements on the matter, including his contention American “intelligence agencies continue to assess all information, but it could very well be that the Crown Prince had knowledge of this tragic event — maybe he did and maybe he didn’t!”

“Trump made a clear choice. It was that this relationship was more important than what might have otherwise been understood as a very provocative attack against a U.S. resident and journalist who had criticized the Saudi government,” Blake wrote.

“[Trump] repeatedly cited U.S. business with Saudi Arabia, including an arms deal he had forged. He cited the long-standing defense alliance in the region between the United States and Saudi Arabia, which the Biden administration has also acknowledged as an important consideration.”

Related:
Biden Stabs Us All in the Back, Removes Terrorist Designation from Group Whose Motto Means 'Death to America'

Trump, however, said that “our relationship is with the Kingdom of Saudi Arabia” and that “America First! The world is a very dangerous place!”

Whether or not you believe an American president should say that, that’s the position of the United States. That’s not what Joe Biden said it should be, however.

Here’s what Biden said in November of 2019, as per CNN: “Khashoggi was, in fact, murdered and dismembered, and I believe on the order of the crown prince. And I would make it very clear we were not going to, in fact, sell more weapons to them, we were going to, in fact, make them pay the price and make them the pariah that they are.”

“There’s very little social redeeming value in the present government in Saudi Arabia,” he added. “They have to be held accountable.” 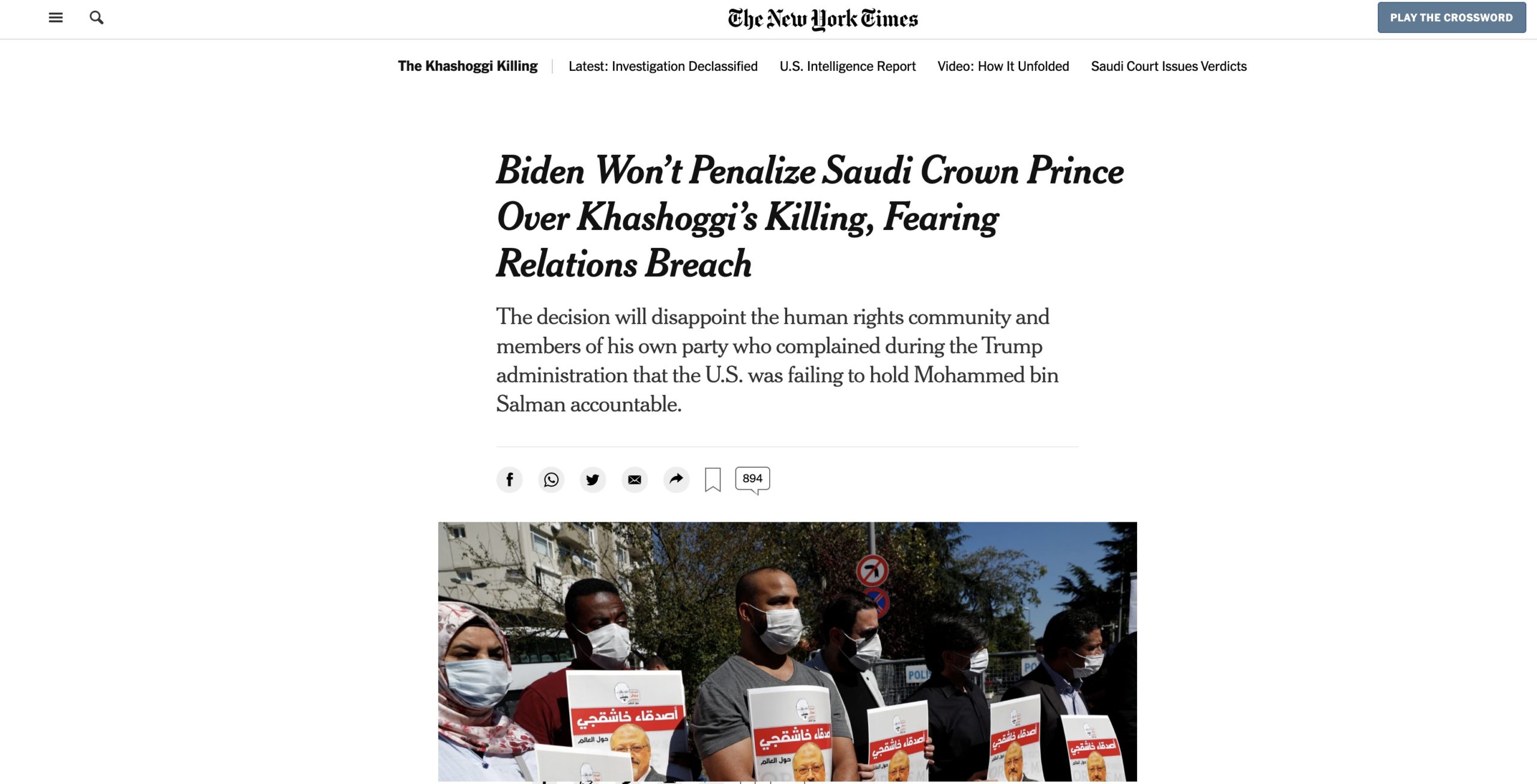 On Saturday, Biden told reporters that he would have more details Monday “about what we’re going to be doing with Saudi Arabia generally.” However, two administration officials said sanctioning bin Salman was never on the table, calling it “too complicated.”

“The recalibration of relations with Saudi Arabia began on January 20th and it’s ongoing. The Administration took a wide range of new actions on Friday,” a White House official told CNN. “The President is referring to the fact that on Monday, the State Department will provide more details and elaborate on those announcements, not new announcements.”

The New York Times, meanwhile, cited sources to report that the White House had decided against any form of punishment against bin Salman because it would cause a breach in relations, and “a consensus developed inside the White House that the cost of that breach, in Saudi cooperation on counterterrorism and in confronting Iran, was simply too high.”

And see if this line sounds familiar: “The relationship with Saudi Arabia is bigger than any one individual.” That’s Biden Secretary of State Antony Blinken, sounding vaguely like Trump did a few years back when he said “our relationship is with the Kingdom of Saudi Arabia.”

So what was The Washington Post’s take? “At the same time Biden has expressed displeasure with the repressive Saudi monarchy, he has called the kingdom an important regional partner, saying the United States will continue counterterrorism cooperation and defensive assistance against regional threats, including Iran.” Oh.

That was straight news, but things were little different in the analysis section in a piece titled, “FAQ: What Biden did — and didn’t do — after U.S. report on Khashoggi’s killing by Saudi agents.”

For instance, these two paragraphs were directly adjacent to one another:

“The Trump administration had blocked the report’s release, as well as opposing any attempts to sanction or sideline the Saudi monarchy, one of world’s biggest customers for U.S. weapons contractors. Saudi Arabia has denied the crown prince had any involvement,” they reported.

“The Biden administration, in contrast, has pledged to ‘recalibrate’ relations. But Secretary of State Antony Blinken said Friday that the United States will not impose any direct punishment on the Saudi royal. The stated Biden calculus has been that Mohammed — the country’s 35-year-old de facto leader — is too valuable for U.S. strategic interests to risk losing as an ally.”

The Trump administration just wanted to obfuscate and sell weapons. Biden’s “calculus,” meanwhile, is that MBS and Co. are “too valuable for U.S. strategic interests to risk losing as an ally.”

“The United States ‘as a matter of practice has not generally applied sanctions on the highest leadership’ when diplomatic relations are already in place, a senior administration official told reporters Friday, The Washington Post previously reported. The official, speaking on the condition of anonymity under rules set by the White House, added that the administration had ‘looked at this extremely closely, over the last five weeks or so’ and unanimously concluded ‘that there’s just another more effective means to dealing with these issues going forward,’” The Post reported.

And that’s just the news and analysis section. If you really want to see The Post’s hypocrisy flag fly, head on over to the opinion section: 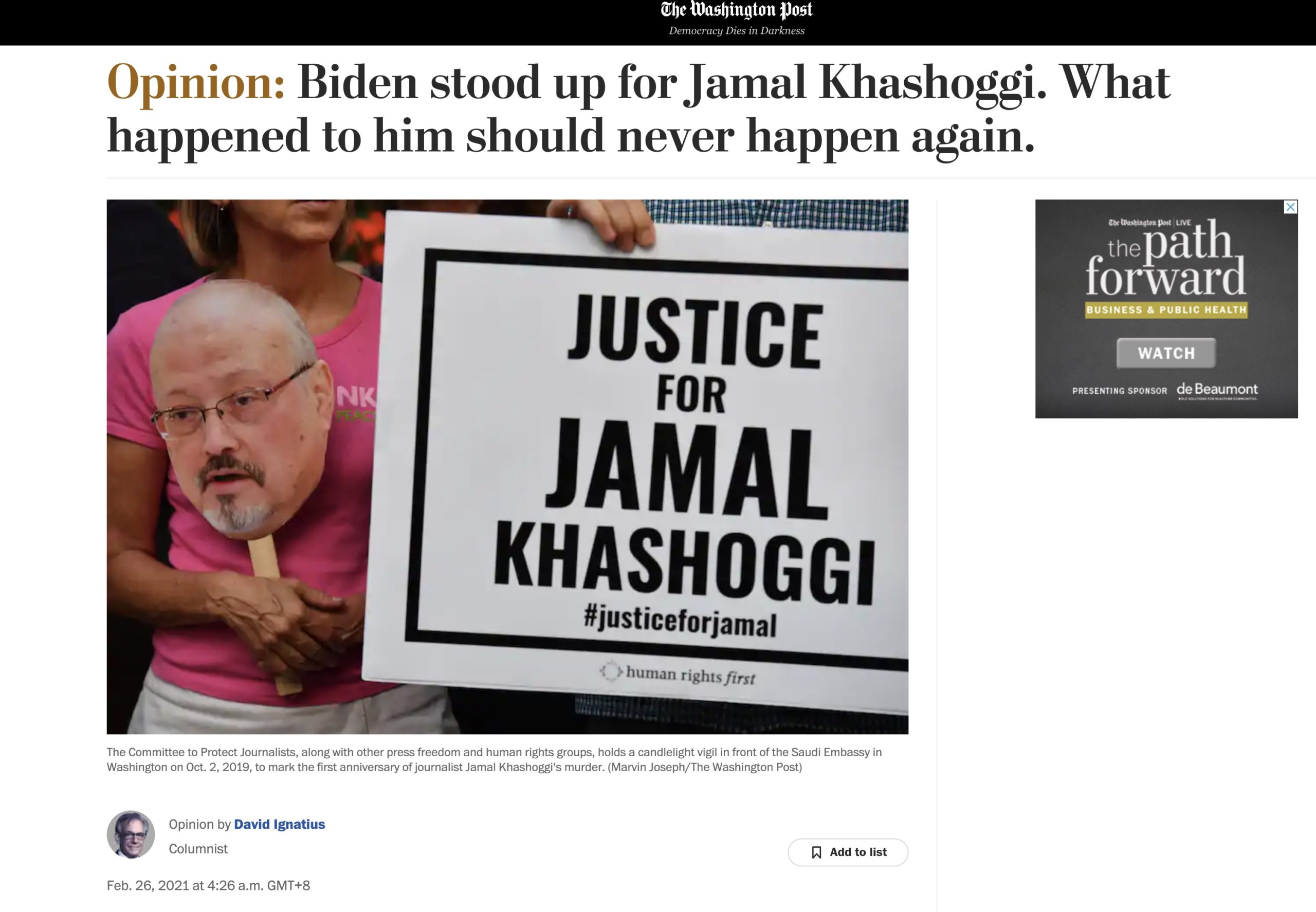 If what the Biden is doing — an elaborately disguised indifferent shrug — is what counts as standing up for Jamal Khashoggi, God help us all.

Donald Trump told an uncomfortable truth and treated the American people like grown-ups in explaining a brutal decision on foreign policy in an often-brutal world.

Joe Biden, on the other hand, was long on preaching as a presidential candidate about what he thought the country should do, but now is making the same decision Trump did without any of his predecessor’s honesty.

A stunning country ‘Sherlock Homes’ manor once owned by Sir Arthur Conan Doyle sits on a forested estate. Doyle bought the massive house in 1924 as a birthday present for […]

<img src="https://storage.googleapis.com/prod-zenger-storage/image/ed6f36fd-9464-44d8-9e70-c234ea8d4a75.jpg" alt="A hyena sits looking at the camera. Hyenas, wild dogs and cheetahs are disappearing from the African savannah, warns new research.  (Greens and Blues via Shutterstock).”> They are […]

Soccer, World Cup 2022 in Qatar, Iran – USA, preliminary round, Group B, match day 3 at Al-Thumama Stadium in Doha, An Iranian flag hangs over a backrest in the […]

Feeding a dog purely wet food could produce as much carbon dioxide as driving 30,000 miles a year in an average car, according to a new study. The authors said […]

A New Device May Prevent The Hooking Of Millions Of Sharks

How This Once Paralyzed Pup Can Now Walk Again

<img src="https://storage.googleapis.com/prod-zenger-storage/image/4dadd7e0-b056-421f-a608-7e501a7480f6.png" alt="Maggie’s owners are Megan Donoghue and Jacob Beesley. After receiving constant medical care, their pup ‘Maggie’ whose limb was paralyzed by a spinal stroke is now making a […]

Woman With Alopecia Who Had Double Mastectomy Shares Her Story

<img src="https://storage.googleapis.com/prod-zenger-storage/image/20221121/feat_6c0e1d13-ee1c-401c-b667-a8d2b14d1f7b.jpg" alt="Marisa Kimmel, who underwent a double mastectomy to prevent cancer, with her husband and son. PHOTO BY MARISA KIMMEL“> A woman who has alopecia and survived a double […]

Wearing A Mask Can Make It Harder To Recognize Faces

If you have a mask on, it can be harder to recognize faces, even if the person you’re looking at isn’t wearing one, a new study reveals. The study was […]